We will follow the CDC guidelines in effect at the time
of each concert for mask requirements.

All concerts are free and open to the public.
To print out a copy of the brochure, click HERE. 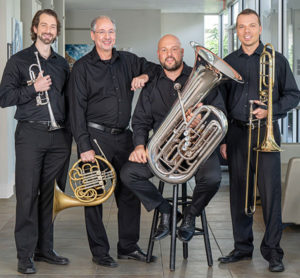 Click HERE on October 16th to watch the concert held at Pine Shores.

The Cypress Brass is a group of professional brass players from the Tampa Bay area. The group has performed dozens of concerts in their ten year existence. A vast repertoire is something the ensemble prides itself on, with works by Bach, Gabrieli, Ewazen, Gershwin, Bernstein, Michael Tilson Thomas and some of the best arrangements done by Luther Henderson. The ensemble slides easily between various works beginning with baroque and allowing the listener’s ear to come to life before transitioning into raucous jazz.

The members of the group have performed all over the country but have a preference towards Florida performances as this is home base for the ensemble. Some of the local ensembles you might hear these musicians in are the Florida Orchestra, the Sarasota Orchestra, Naples Philharmonic, St. Pete Opera, and the Jacksonville Symphony. The Cypress Brass has a deep understanding of the brass quintet repertoire and their goal is to make that accessible and enjoyable for anyone listening. 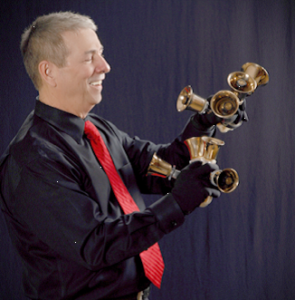 Click HERE on November 20th to watch the concert held at Pine Shores.

Danny Lyons is a solo handbell artist, handbell director, composer, and clinician, and he is the inventor of a method of playing 8-in-hand and has named it “Danny’s 8”.

He has been the director/clinician at numerous handbell festivals, and has played solo handbell performances throughout the United States and abroad.  Danny has recently retired as the handbell director at Christ Episcopal Church, Pensacola, but continues performing on solo handbells, composing handbell music, and accepting teaching and directing positions nationally.

He is now semi-retired from a 50 year career as a piano technician and rebuilder, and lives in Pensacola with his 2 dogs — Nicky, a Golden Retriever and Koby, a Whippet. 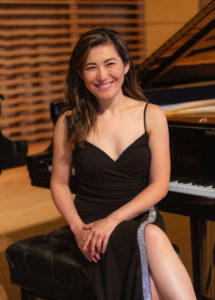 Click HERE on January 29th to watch the concert held at Pine Shores.

Internationally acclaimed Chinese-American pianist, Dr. Gulimina Mahamuti, enjoys an active career and performs extensively in major cities in the U.S., Canada, Denmark, Hungary, Turkey, and China, with broadcasts on radio and state TV.   She played recitals at Carnegie Hall in New York, at Trinity Church in Boston, and performed frequently as guest pianist at universities and music schools across the nation.  Besides performing, Gulimina is published in major music journals, including the People’s Music in China and the Clavier Companion in the U.S.

Gulimina was born in Karamay City, Xinjiang, western China and is the first Uyghur from China to receive a Doctorate of Musical Arts in Piano Performance from the United States, where she studied at University of Missouri-Kansas City under Dr. Robert Weirich. She received two Master of Music degrees, one in Piano Performance with the highest honor of the Graduate Dean Academic Honors and one in Piano Performance and Piano Pedagogy from Harbin Normal University in China. Dr. Mahamuti is the President of MaineMTA and serves on the national committee of Diversity, Equity, and Inclusion at the MTNA.

Before moving to the beautiful state of Maine in May of 2018, Dr. Mahamuti lived in Ohio for 11 years. She was an Assistant Professor of Music at Ohio Wesleyan University and previously taught piano pedagogy at Capital University.  Before coming to the United State, she was a lecturer of piano at the School of Music of Northwest University for Nationalities (China).

Click HERE on March 26th to watch the concert held at Pine Shores.

The State College of Florida Chamber Choir is an auditioned mixed vocal ensemble of approximately 18-20 voices which regularly performs both for on campus concerts and official programs as well as off-campus events. The Choir is honored to have partnered with Choral Artists of Sarasota for several presentations including Hadyn’s Creation, Poulenc’s Gloria, Libby Larsen’s Barnum’s Bird, the gospel version of Messiah– Too Hot To Handel as well as the Holiday 2013 concert.   Featured in the 2015 Munchtime Musicale Artist series at Holley Hall, the Choir also performed as the featured ensemble in the 2018 Sarasota Concert Music Matinee series at the Van Wezel.  Under the direction of Melodie Dickerson with accompanist, Lurray Myers, the SCF Chamber Choir presents a varied repertoire of music from Renaissance madrigals to cutting edge choral works to contemporary jazz tunes as well as traditional choral literature.

Co-Pastors Bruce & Karen Wismer welcome you to join us for worship on Sundays.
Please visit www.pineshorespres.org to learn more about our worship services.
9:45 a.m. Traditional Worship Service in the Sanctuary

Pine Shores sponsors an annual Concert Series which is free and open to the public October through March. A variety of genres is presented. Interested in supporting this program?  Please call our Music Director Rick Holdsworth to find out how; music@pineshorespres.org, (941)922-1597, ext. 104.

The Concert Series is made possible by the generosity of many donors. Concerts are held in the Pine Shore Presbyterian Church Sanctuary.